Cafe Wha? at the corner of MacDougal Street and Minetta Lane.

Sometime in 1968, shortly after the formation of Sweet Smoke, the band secured an audition at a popular Manhattan nightclub called Club 54. The audition, a complete disaster, turned out to be the most significant event in Sweet Smoke’s early development. It was a Monday night. The band had its instruments and amplifiers loaded in their van with no place to go. Andy had an idea. In his previous groups, he had a regular Monday night gig at the Cafe Wha in Greenwich Village. It wasn’t a gig in the real sense. It was something the management called “audition night”, a way to get local bands to play for free in exchange for the prestige that came with playing in a club in New York’s trendy Greenwich Village. So the band sent their equipment off to the club in the van while the group jumped on the subway downtown.

At the time, the manager of the Cafe Wha? also owned, or managed – it’s not clear which – two clubs in the Caribbean, one in old San Juan, Puerto Rico and the other in St. Thomas, U.S. Virgin Islands. The band recalls the manager offering them a gig in the islands if their set went well that evening at the Wha?. The band brought the house down and were indeed offered the gig of a lifetime. There was a small problem. It was March, 1968 and three of the members, Mike, Marvin and Jay, were in college. Taking the gig would mean quitting school. They quit school. What followed was three months of playing six hours a night, six nights a week. Somewhere in paradise, Sweet Smoke became a band.

The early days in Emmerich along the Rhine

Spending carefree days on some of the world’s most beautiful beaches, the band pondered its future. After the whirlwind events of the past several months, going home to Brooklyn to live with their parents was not an option. Mike began talking about going to Europe. Mike was very persuasive. The warm Caribbean breezes and gentle waves were intoxicating. It was 1968 and anything seemed possible. By the end of that year, Mike, along with Andy and old dear friend Marty had purchased one way tickets to South Hampton, England and off they went. Jay and Marvin followed later and by late 1969 the entire band, their plan to settle in Amsterdam having failed, found themselves, with invaluable help from unforgettable people, firmly planted in Germany.

“By the dawn of the 70’s the band had acquired a sizable following and had moved to Europe where they spent the next years in a van driving though France, Holland, Germany delivering to audiences of  quickly expanding sizes a typically 60’s form of rave like musical be-in.  The party was only beginning. They began to open for large European pop bands like Focus and Golden Earring.  They were quickly signed to Electrola Records for a 3 Record deal in West Germany and recorded their first hallucinogenic stream of musical consciousness,  the quintessential 60’s jam fest Just A Poke.

The fans and the critics were all over it, , a mix of jazz, rock, improv, avant garde, inspired just as much by John Coltrane as it was by The Doors. The cover of the record was a brazen shout out to inner consciousness and a  simple downright salute to the fact that the boys had gone cosmic, global and had tuned out, turned on and dropped whatever they could find. The band kept rolling for years, attracting new players, losing original members, recording with the highest rung of European free jazz musicians and generally having the time of their lives.”

India – Chapter II and Beyond 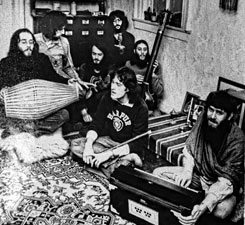 In many ways Sweet Smoke’s European story had two distinct chapters: pre and post India. Like the Beatles, The Beach Boys and many bands before them, the boys became spiritually restless. Their interest in yoga, meditation and self-realization grew stronger with time and at some point in 1972 the band took a break from their rock star lives to embark on a life altering journey traveling over land to India. In what seems an utterly reckless, if not altogether impossible undertaking, they motored from Europe to India, driving in the process through Iraq, Iran, Afghanistan and Pakistan before arriving in India. What followed was a year long stay in an Ashram where they practiced chanting and meditation and traveled extensively through one of the world’s most enchanting countries. The experience had a dramatic and lasting impact. Mike, the band’s saxophone player and front man ultimately married an Indian woman and today lives in India. The seductive sights and sounds he encountered there still inform much of Jay’s current work. It should be noted that not all the band members were equally seduced by the lure of the East. While most of the members packed the truck and took off to India, Marvin, the band’s lead guitarist and vocalist returned to the States, married his girlfriend and prepared for what would be the next chapter in Sweet Smoke’s story. In 1973 the band reunited in Germany, this time in Bavaria, and resumed their touring and recording career.

Bands break up. The one’s that don’t are the exceptions (think Beatles). By 1974 the band members had become disenchanted and began to think about life after Sweet Smoke. Mike had already left the band and was ably replaced by Rick Greenberg. Marvin, who was mostly self-taught was yearning to study music in a more formal setting. The luster had worn off and in 1974, after recording its final album, Sweet Smoke Live in Berlin,  the band broke up for good.

The original members still remain friends and over the years have gotten together several times to play and reminisce but mostly to laugh.