In Astoria, Queens, the answer is a resounding yes!

Those of us lucky enough to be born and raised in Brooklyn tend to go through life feeling just a little special. After all, there are books, like When Brooklyn Was the World by Elliot Willensky, and even road signs proclaiming Brooklyn’s supremacy. Actors, comedians and musicians proudly call Brooklyn their home. In my travels over the years I’ve found that telling people I’m from Brooklyn created an expectation … as though being from Brooklyn meant that you’d seen everything, heard everything, experienced everything and couldn’t be fooled, tricked or duped. In any event, as a kid growing up in Brooklyn I always thought of Queens as some kind of distant outpost. I had few occasions to visit. I didn’t have relatives who lived there. Yes, there was the 1964 Worlds’ Fair in Flushing and the hapless Mets at Shea Stadium. Come to think of it there’s some kind of tennis thing there too. The truth is I never thought much about the other 4 boroughs … until two of my kids moved to Queens.

Astoria, Queens – The League of Nations 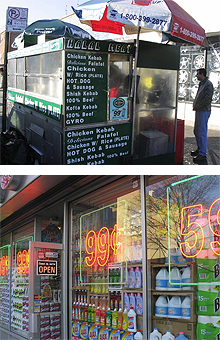 Now that I’ve spent some time there I have to say … I’m impressed. First of all, it’s convenient. A short jaunt on the subway gets you to mid-town Manhattan in all of 15 minutes. Secondly, and this is huge for me, if you like food, Astoria is a must. The streets are alive with the smell of shish kebab and gyros coming from the street vendors stationed, it seems, at every corner. In one short walk down Broadway I passed restaurants of six different countries – Greek (a lot of Greek), Chinese, Vietnamese, Colombian, Russian and Middle Eastern (I wasn’t counting the bagel shops and pizzerias). I overheard conversations in half a dozen languages, some that I could identify and some I couldn’t. The owner of one 99¢ store on Broadway (there are a lot of 99¢ stores in Astoria) is a Lebanese Jew whose mother tongue is Arabic but who is fluent in Spanish, Greek and Hebrew. When I asked him why he bothered to learn so many languages he told me it made his customers feel more comfortable. How is that for friendly?

Not Exactly Europe But Easier to Get To

So if you can’t afford that European vacation, take in the sights, sounds and aromas of Broadway, Steinway Street or Ditmars Boulevard on a sultry summer evening, add a little imagination and you can almost convince yourself that … well you know what I mean.

Brooklyn may still be the center of the universe (smile) but that not-so-far-away outpost called Astoria, Queens is certainly worth the visit. 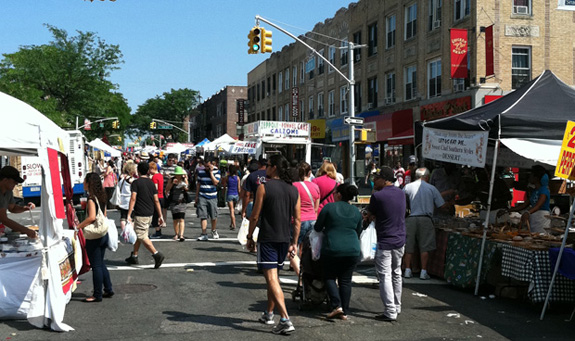 Over the years I’ve directed many fans to Amazon or to some of our fan sites or even Wikipedia (it’s mind boggling that we’re on Wilipedia) to get information about the band. Invariably I get the same question over and over. Are you Marvin Kaminowitz,  the guitarist? Yes I am. Let me explain.

What’s the Name of the Band?

Sometime in the mid 70’s I was leading a trio playing 5 nights a week at a hotel lounge in the Boston suburb of Newton. Our agent approached me and said he needed to know the name of the band so he could do some promotion.  Without thinking I said The Marvin Kane Trio. That was the first time I used Kane instead of Kaminowitz. But I didn’t just pull the name Kane out of thin air. Both my father’s brothers changed their names from Kaminowitz to Kane. In fact, my father was the only Kaminowitz left, except for me of course. So when I was put on the spot I just blurted out Kane. And that’s been my name ever since.

Things got a little sticky when I had a son. He was always known as Kane too except for the inconvenient fact that it wasn’t legal. So somewhere around 1984 I made it official by legally changing my name. And that’s the story. So if you ever have the occasion to look at some of Sweet Smoke’s early reviews and see the skinny long haired guy with the cherry red Gibson ES350 stereo guitar, it’s me, Marvin Kane, formerly Kaminowitz.